(A new link due to the fact that Youtube removed the video from its “platform.”).  Now, ask yourselves, why would they want you to not see this?

An excellent documentary by the Epoch Times regarding the ongoing con to deprive American citizens of their right to an open, free, and fair election.

Don’t be fooled by the Hawaiian shirt

The link below offers a very articulate and easy to understand appraisal of the recent SCOTUS decision regarding the 2020 election.  This guy offers more insight and objectivity in each of his videos than establishment media can conjure in an entire year.

The Deep State — and Compliant Fools — vs. the “Outsider”

By now, those who genuinely try to stay tuned to important news items of the day have seen this man’s (link below) revealing appraisal of the power-plays of contemporary American society.

I doubt that this Chinese academic has a love for President Trump since he is in close affiliation with Chinese Communist Party leadership. None the less, his appraisals are objective and certainly accurate to those of us who know what Trump represents and what is represented by the Ivy-league planners entrenched in American government.

The moniker, “deep state” was first coined by the left-wing journalist Glen Greenwald when he sought to describe the entrenched forces of the Washington elite. To use Donald Trump’s simplistic but to-the-point vocabulary, “these are bad people.” 😉

I expect these budding internationalist control freaks to act as they do. What pisses me off are the many common American citizens who willingly support this cabal of scum and actively oppose Trump’s simple desire to prioritize the successes his nation and its citizens.

The people who think they are being avant-guard rebels by being in lockstep agreement with dystopian bureau thugs are serving no one.  Their willing compliance with the mission of tyrants could potentially doom us all. Their stupidity is reprehensible.

This is how a real revolution begins.

She knows what we know.  When Barack Obama won his first term, he immediately resigned his Senate seat (wouldn’t be needing that anymore).  As of yet, Kamala Harris has not relinquished her seat. If she wants any job at all next year, she’s going to have to hold on to her senate seat because she isn’t going anywhere else...and, she knows it. 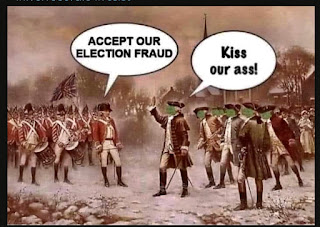 # posted by Promethean Antagonist @ 9:12 AM 0 comments

It just keeps getting better with each passing day.

You Can Repeat a Lie Over and Over Again...

Establishment forces in media, culture, and government have done their damnedest to hide from the public the greatest political scam in American history.

It’s been slow and there have been some setbacks but the extent of 2020 election fraud is slowly leaking out to the public. So much so that even 20% of Democrats (!) are polling a belief that the election was fraudulent.  The new alternative sources of news and social media have nowhere near the power of tech giants like Twitter, Google, and Facebook but the gains of new media are substantial none the less.  I recommend that people at least view the highlights from the hearings taking place (currently in Arizona). The revelations should be shocking to anyone who believes in a free constitutional society.

Trump may appear paranoid at this point (under the circumstances, who wouldn’t be) but he is clearly aware that that he can’t trust the FBI, CIA, or any other deep state machine.  He IS playing 4-D chess.

There is a good chance that justice will prevail.  The final last-ditch effort by the global power-elite to make their play will be when they unleash street mobs from BLM and Antifa.

You couldn’t make these times up in the most far-fetched novel.